First flown in 1917, The Balilla A1 was Italy's only ''home built'' Fighter Bi-Wing, designed for use in World War I. Due to late design recalls, The A! Never saw combat during that War. Wing strut placement (minus cross strutting), proved to be it's death as far as a primary Fighter. However, both The Soviet Union and Poland would use several Models to augment their Air assets in The Polish-Soviet War of 1919-1920 (mostly as Recon Aircraft). The Mexican Army also purchases a single A1 for their use. 250 Production Models were made. Flown by (1), The Balilla A1 was 22-feet long with a multi-wingspan of 25-feet. Power came from a single SPA Piston Engine, (220-HP) and was capable of airspeeds of 140-mph. Mission ranges was 160-miles, with an operational ceiling of 16,000-feet. Armament included Twin Vickers .303 Caliber Machine Guns. 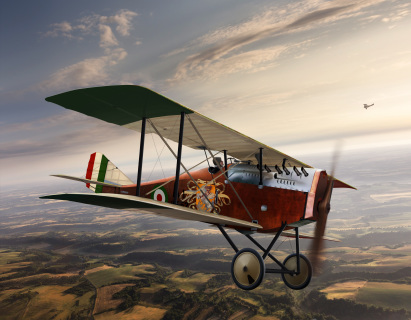