The Italian Aermacchi MB-399 is a long serving Jet Trainer used Worldwide, since 1976. A primary Trainer with The Italian Air Force, The MB-399 despite it's popularity – was only produced originally to 240 Models. During The Falkland Island War of 1982, The Argentine air Force used The MB-399 as a Support Fighter against The British. Crewed by (2), The MB-399 is 36-feet in length with a wingspan of 35-feet. Powered by a single Rolls-Royce Viper Turbojet Engine, it can produce 4,000-IBF of Thrust. Rated airspeed is 560-mph. Operational ceiling is 48,000-feet. Although a Trainer as stated, The MB-399 can be deployed with (2) 30mm Wing Guns and the ability to support a wide variety of Missile, Rocket and Ordnance packages. 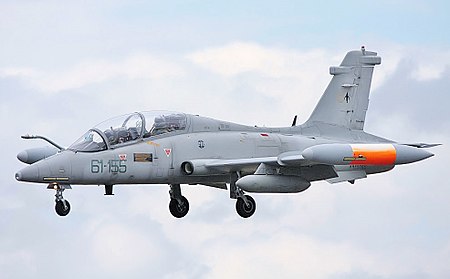