The Villar Perosa is often seen as the World's first ''true'' Machine Gun. Designed to be either Mounted (via Aircraft) or Ground (Infantry) deployed. It suffered from range issues – which quickly negated it's use to (few) Grounds Forces. It was a ''noble effort'' which would be further engineered into the common Machine and Sub-Machine Gun Classes, used by Armies throughout The World.

Designed in 1914 by a Firearms Concern in Northwest Italy (Town of Villar Perosa), The weapon was a Twin (side by side) barrel weapon, which fired a 9mm round. It's cyclic rate of fire was 1,500-rpm. As stated it suffered from range issues (possible from the somewhat ''lightness'' of the 9mm round. It could only achieve 1,00-yards (insufficient against Aircraft operating at normal operational ceilings).

The Perosa weighted only 14-pounds and was fed it's ammunition by a Box Clip. It took (2) soldiers to operate. Control over the often high vibrations from blowback was cushioned by two support pads to the Rear Receiver Group. In it's Ground configuration, a Front Mounted Tripod extension was installed, which allowed it to be used from a Prone firing position or from Trenches. Only a few were deployed. A Version was also developed by The Imperial German Army in 1918. 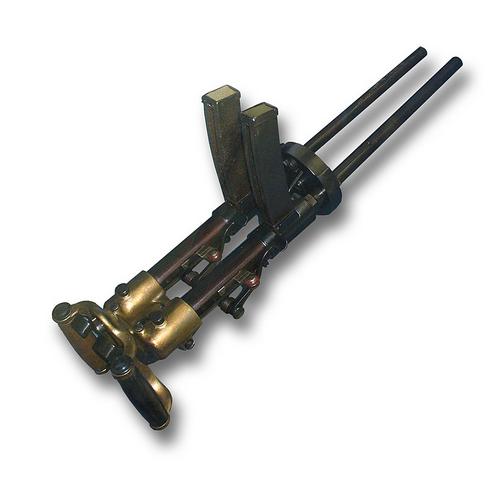