The forerunner of the Militia System and used by many Nations, these Infantry Units were non-professional "Citizen Soldiers". Derived from Peasant Troops, their initial use can be traced to The Middle Ages. Irregulars, normally wore no Uniforms and were required to provide their own weapons. As such, and especially due to their lack of training, they were often used as "Melee" Attack Troops. They were used as initial "contact " Forces - as well as Flank Protection or Reinforcements, when Reserve Forces were exhausted.

In some Historical Periods, Irregulars were used as "Pillage Forces". This was actually a valid term. Irregulars were not paid or supplied. As such, promise of pay and such could only be induced by unchecked violence against an Enemies "Home Front" or Supply Line. As time progressed, Irregulars were given limited training and were eventually commanded by a Regular Officer of The Army they supported. Soon, Irregulars received Uniforms and a stipend of payment (although pillaging was still the standard order of payment).

Some Irregular Forces were used as Frontier Forces. They were tasked with protection of Borders. Often, these Forces lived within the area they protected. They would often be used to augment a Regular Army Unit (often used in Garrison), when hostilities developed. The Irregular Force System flourished in Colonial American from it's creation in the 16th Century. Soon, Irregular Cavalry was seen in use - as speed could be increased with regards to deployment. During The American Indian Wars, the majority of far flung Garrisons were heavily augmented by Irregulars Cavalry Forces (especially during The American Civil War of 1861-1865).

Great numbers of both kinds of Irregulars Forces were used by American Confederate Forces against The Union Army. Some were pressed into Commissioned Service, while others not. Some of these Units were actually made up of "Border Ruffians" and Outlaws. The African Boer Wars were another example of both Irregular Infantry and Cavalry. The Dutch Boers were very effective against The British Army. The use of Irregular Forces would still continue in some form well into the 20th Century. Their use, now influenced more by religious dogma, rather than political - finds today Irregulars called "Insurgents". 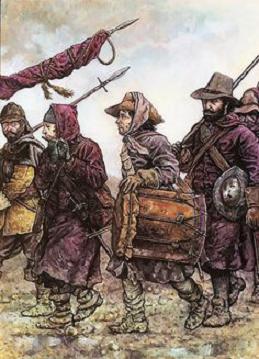