The Hobelars were a type of 13th Century Light Cavalry Force - which developed exclusively in Ireland. Their name "Hobelar", comes from the highly specialized and breed horse - The Hobbie. These animals were small, but very agile creatures - very adept in Swamp or Bog. The Hobelars had very specific functions. Not just Light Cavalry, they were used as Scouts and as "Ambush" Troops. The Hobelars also have a link to a similar Light Cavalry Troop from 12th Century Wales. During The Scottish Wars of Independence, Robert The Bruce used Hobelar Cavalry, very effectively against The English Invaders. So much so, even English King Edward I, pressed Hobelar Troops into his own Services.

Originally, Hobelar Cavalry were exclusively Mounted Archers. By the 14th Century, they were noted for their 12-foot Ash Spears. Many Historians link this innovation to the later developed Cavalry Force known as The "Lancer". Hobelar Forces were noted for their "lightness" of dress (which was important for speed). Halverson, Coat Plates and later - Gambesons were the norm. The iconic "Kettle Hat" - was their primary protective headgear. Another combat style indicative to Hobelar Tactics, was that they used no saddle, bridle or stirrups. The Hobelars ceased in use around the 15th Century, when the lack of a standing "Irish" Army became evident. England and other Nations in The Region, saw no need to maintain the specialized type of Horse Troop. 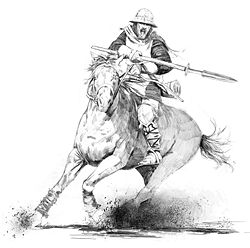