Colonel Henry Ireton raised a Regiment of Cavalry (Horse), in support of The Parliamentarian Cause in The English Civil Wars. His Regiment was mustered in 1645, it was composed of (6) Troops. Colonel Ireton trained under Oliver Cromwell and part of his ''New Model Army''. They would fight in several major battles and skirmishes in The War, eventually being deployed to Ireland to put down rebellions. Their Colors were a Red Field with a Black and White Border which extended throughout (save The Hoist). A series of White Bannerolls were prominent, which was written in Latin the phrase ''Divine Who Loses Her Servant'' 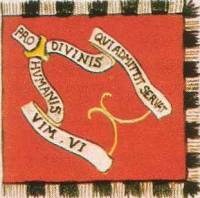