The Al-Hussein Missile was developed by The Iraqi Military as a War Asset in 1987. Iy was based in large part on The Soviet (Russia) made Scud Rocket (an Intermediate Range Missile). The Al-Hussein had a far great operational range than The Scud, but had a poor guidance system. It is unclear just how many of this Class of Missile were produced or if all were destroyed after the fall of Iraqi Dictator Sadam Hussein.

Deployed greatly by Iraq against Iran during The 1980 War, The Hussein Missile weighed over 14,000-lbs. There were 42-feet in height with a 3-foot diameter. The Missile was a liquid propelled device (non-staged), and had a 400-mile range. The warhead supported over 1,000-lbs of TNT. The Hussein could be configured for Chemical dispersal and for Nuclear release. The Hussein had a 96-mile operational ceiling.

The Missile could be launched from staging areas (as with a traditional rocket), or could be deployed via Rail and Mobile Launcher (which was the most popular method). It normally took 8-minutes to target when fired. It is estimated that Al Hussein Missiles killed or wounded as many as 2,000 Iranian Soldiers and Civilians during The 1980-1981War. While devastating, The Missile suffered from poor guidance and many of the 200 deployed in that War – failed to target or outright exploded prior to target.

During The Gulf War of 1991, Al-Hussein's were deployed against several Middle Eastern Countries with varying degrees of success and failure. The vast majority of them were targeted (destroyed) in flight or destroyed on the ground prior to launch by The USAF. As stated many were destroyed after The War, but it is unclear how many may have survived and just exactly ''who'' may have some. 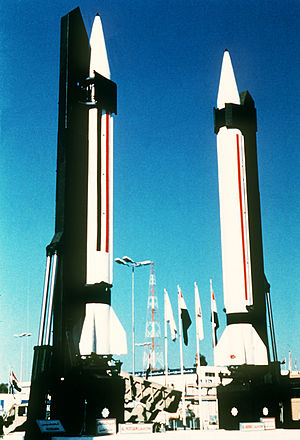