Originating during The Roman Kingdom Period (5th Century BC), the Title of Interrex was said to have been created after the death of the Roman King Romulus. Without an Heir, The Kingdom would have plunged into Civil War. It was determined by The Kingdom's Senate, that 5 learned Senators from The Decurio would serve as Interrex. They had a King's Authority and could Rule as such. Their only limitation wad their ability to wage War (they needed Senate approval).

As time progressed, when a King was selected from Dynastic measures, the Interrex was no longer needed. Only in cases of a sole Male Heir, too young to Rule, was an Interrex selected. He would rule in the name of the young King until he became legally old enough to assume the throne (normally at 16 years).

This sometimes created problems with certain unscrupulous Interrex. Used to power and absolute authority, some refused to yield their Title. Thus would lead you assassinations and Civil War. By The Republic Era, The Interrex began to feel from use. By The Imperial Era, Dynastic Succession lead to the Title being dropped, but the position still in use to some degree. The Title would still continue into The Middle Ages, as a Regent. 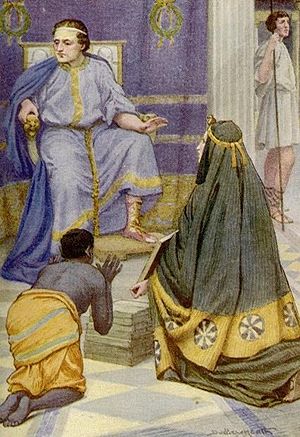