Indicative to The American Military, the development and display of a Service Flag – began with America’s involvement in World War I (1917). Families of Service Members (regardless of Branch), would display small window Banners in their Homes. These were rectangular in shape. Bordered in Red, the Center was White. For every Service Member, a 5-pointed Blue Star was placed in the White Field. Should a Service Member be killed in Combat, The Blue Star would be replaced with a Gold version. This practice lead to the Title of a “Gold Star Mother” (or Father). Used with great pride during all other American Wars, the practice became unused during the unpopular Vietnam War of The 1960s. It was revitalized with the beginning of The War on Terror (2001) and is practiced today. 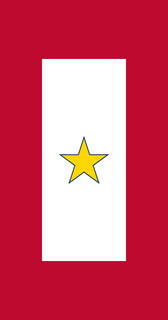 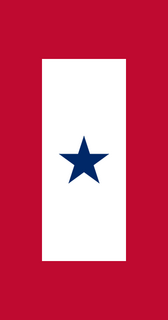