Located in South Tyrol, Italy, Innichen Abbey was originally built in the 7th Century. Renovated and consecrated in the 12th Century, Innichen' Bell Tower is a survivor of the 15th Century. The interior of The Abbey is entirely frescoed with 15th to 17th Century religious iconography. Rather than a traditional “squared” design, the rear of Innichen was built out of (originally), large free-standing blocks of stones. This gave it a more reinforced structuring (which may have been used as a form of defense point for the City). A Center Dome was built in the 16th Century (reinforced by wood). Innichen also served as a crypt for many local Lords. It was renovated in the 19th Century and still functions within The Catholic Church. 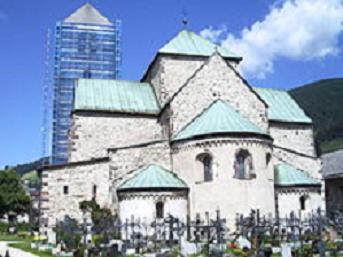