Sometimes known as "The Hollow Square", this formation is designed for Infantry Units to form in close quarter when attacked (or threatened with) - by Cavalry Units. Another formation based on ancient origins, it evolved from The Pike Square. In deployment, The Square or sometimes a Rectangle, consisted of 2 or more ranks of riflemen. They were armed with rifles with bayonets affixed to the barrels. Squares could be used with 500 to 1,000 men if needed. Most often, the Unit Commander, Signal Troops and a Reserve Force was stationed in the Center. The Reserve Force would be used to fill any gaps afforded by casualties. In a 4 Square rank, all sides of the formation faced a different direction (to provide that all areas were equally protected).

Discipline was a necessity in order for a Square formation to work (and troops were well drilled). An added innovation to the Square was the inclusion of Volley Fire. Although varying techniques were uses, in essence - 1 rank of riflemen would kneel and the rank directly behind them would stand. When the rear rank fired, it would immediately lower and reload. The front rank would immediately rise and fire and they too would lower. The back rank (now reloaded) would fire again. This technique would be repeated over and over again (on all sides of the Square, if needed). Should an enemy still be able to make contact with the Square, the soldiers would rely on their bayonets (using tactics very similar to the ancient Romans). Many Armies used The Square with great success (it was especially popular in English and French Armies). Unfortunately, as artillery became better refined (with the addition of rifled barrels - which increased range and accuracy) - the use of The Square would diminish and eventually vanish from the battlefield. 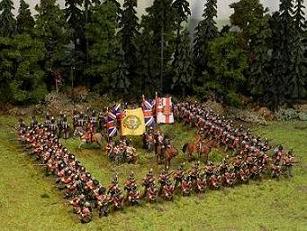