Seen in 17th Century Indian as a fighting weapon (that can actually trace similar variations to Ancient Rome in the Gladiatorial arsenal of weapons), The Pata combined the innovation of a protective enclosed gauntlet and a fixed sword blade. Double-edged and extremely sharp to the point of the blade, The Pata blade ranged from 10 to 44-inches long. Pata's could weight 5 to 10-pounds. The protective gauntlet extended over the hand and covered the entirety of the user's forearm. The construction of the gauntlet caused the user to form a clenched fist. Used very much as a Battle Axe, basic swordsmanship could still be applied. Used by both Indian cavalry and infantry, it was often used more effectively in groupings of soldiers. Made of steel, Pata's could be very elaborate or plain in decoration. 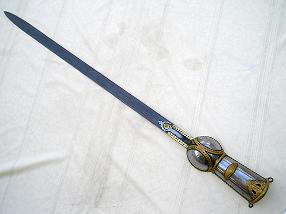