From 17th Century India, The Katar was a unique styled fighting blade/knife. Well known by British soldiers, The Katar featured a rectangular pointed bladed that was double-edged and finely pointed. It's uniqueness was in it's handle. An attached bar-like handle, flanked by supporting bars for the stability of the Katar's blade was designed. This “H” shaped handle was unique in fighting blades. Also unique, was in that the “H” guard also featured a type of “shock absorber” to displace the strike force upon delivery. In theory, the “H” guard protected the user's knuckles from injury when deployed. More effective in pairs, The Katar could be used in hunting and warfare. Developed as a thrusting weapon, later versions of Katar's were also developed into Combination Weapons – featuring a single-shot pistol. There was also a “Scissor” version of The Katar that was designed to “open” upon the initial strike (thus creating an even more horrific wound). These variations were filled with equipment malfunctions and were not used as often as the fixed version. 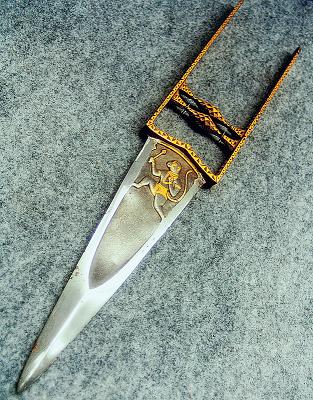