The Indian Chakram is a form of Ancient Hindu cutting weapon, seen in use as far back as the 2nd Century BC.  The Chakram was a circular, hand-held hoop which had a sharpened outer perimeter. The inside of The Chakram (or Radius) was dulled – thus allowing for ease in holding the weapon. A stylized form of training was required to deploy The Chakram effectively. In usage, the blade was thrown laterally, as a Disc. The spinning, forward motion caused the blade to gain forward momentum. Upon contact. The Chakram was a slicing/cutting weapon.
In close quarters fighting, in which the throwing of The Chakram was not feasible, it could be used as a chopping and cleaving weapon – equally as deadly.

Made of beaten (hand forged) brass or related metal alloy, The Chakram was often highly engraved and decorated. Often religious mottos or prayers – used to invoke Divine assistance, were placed on the blade. Later versions also had an interior handle (made of wood or metal) was added, and created a “non-throwing” version of The Chakram. Chakrams were originally carried or “worn” on long stiff conical Headgear known as Nihang Turbans. Up to 6 Chakrams could be placed or spaced on the Turban. This served as both decoration and a “warning” to potential Enemies or attackers. The Chakram was popular with many Royal Guards.

In the hands of a highly trained Thrower, The Chakram could be deployed to an excess of 300-feet. More effective than a Spear, Mounted Warriors could carry many Chakram (throwing them with great speed and accuracy). The advent of the Children’s toy known as “The Frisbee” (or “Flying Disc”) was based on The Chakram design. 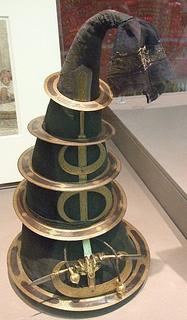