Raised in 1643, Lord Inchiguin's Regiment of Horse was first deployed to Ireland to participate in The Irish Confederate War. The relatively small Unit with only 70 Officers and Men, they originally rallied for service to King Charles I (Royalist) during The First English Civil War. They ''switched'' sides to support The Parliamentarians and still again ''traded over'' a last time to The Royalist Cause. By this time, their Recruits grew to over 600. Fighting in most of the Cavalry engagements of The Second English Civil War, they would be disbanded in 1648.

Their Colors were a Field of Red (never changed even when they served briefly under The Parliaments). In the Upper Left Canton was The White and Red Cross of St. George. As a Irish Unit, a Gold Harp was placed Center of The Red Field. Their Motto placed on The Flag was ''Give Your Hearts Only to God''. A Black and Gold Border surrounded the Flag Perimeter, save The Hoist. 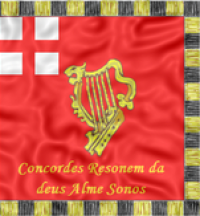