The original Standard of Imperial Germany under Kiaser Wilhelm II, it flew from 1892 until it was replaced after his abdication in 1918. This was the Flag most commonly associated with World War One Imperial Germany. A Tricolor, it consisted of 3 horizontal stripes, Black, White and Red. It was first seen during The North German Confederation Revolution  in 1867. Different variations of the Flag were created to denote military affiliations (Army, Navy and Air Corps.)
Also known as The Second Reich Standard, it was replaced by The Weimar Republic's President Hindenburg when he was elected into Office in 1919. The NSADP briefly re-adopted it on 1933, when they came to power. It was replaced in 1935.
The Imperial Colors were considered briefly as Germany's National Standard after World War II, but it was considered too militaristic in memory, with the current Black, Red and Gold chosen instead. 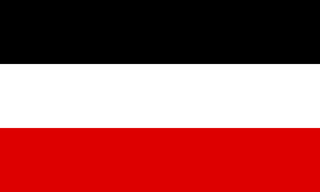