A Roman soldier similar to a Signifer. His position was to carry the image of The Emperor into battle. The Imperial Period (during which the "cult" of The Emperor was developed), created this position so that "The Emperor" was seen on the battlefield and was "all knowing and all watching". The unit was NOT expected to lose a battle or bring disgrace to Rome or Her Emperor if he was present. The image was made from beaten metal (made in a frontal or bias relief). The plaque was mounted on a 6 to 8 foot long wooded staff. Normally carried by a junior-grade officer, like most Roman Standard Bearer's, the Imaginifer wore the "animal hide" uniform.

They were always place in front of the leading Cohort and would not be carried in front of a Legion. As The Imperial Cult began to wane in Rome's later years, Imaginifer's ceased to carry the image of The Emperor. By the late 3rd and early 4th Century A.D. -many of Constantine's Imaginifer's carried the image of Christ (after Rome adopted Christianity as it's State religion). 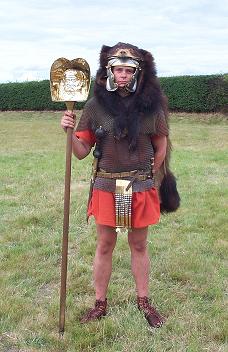