The term "Hussar", has many different origins - depending on the Era of usage. Linked to an early form of Light Cavalry and Mounted Infantry, the general usage of the word developed in the 14th Century. Hungarian King Matthias Corvinus created what is credited as the first Standing and paid European "Army" of non-conscripted Soldiers. These Troops, known as "The Black Army" (aka "The Black Legion" - composed of formed Companies of Infantry, Cavalry and Artillery.

Corvinus also saw that the need for an Elite Force of specially trained Infantry, trained in Cavalry tactics of The Era. These Forces were known as "Hussars". Historians attest that Corvinus may have adopted the term from seeing the vaunted Polish Winged Hussars. Nonetheless, lightly armored Hussars, began to appear. Soon,  all European Nations and Kingdoms began to adapt into their Militaries a form of Hussar. The use of Sword and early Firearms soon separated them from traditional Cavalry. By the 16th Century, the advent of first The Musketoon and then later Carbine, were definate Hussar weapons.

The primary tactic of The Hussar was that of "Shock Troop". Striking fast, they "bled" an Enemy, harassed supply and communications. In general, Hussars were recruited from Lesser Nobility. By the 17th and 18th Centuries, most Classes of Nobility saw Hussar Service as part of their "Title". Hussars were noted for their colorful uniforms. Unlike most mounted Units, Hussars uniforms were made to fit snug. This was no mere fashion quam. The tighter fitted uniforms allowed for no wind resistance in a charge. The two primary identifiers for The Hussars, were their Shako Hats of animal fur and their unique Pelisse Short Coats. The height of The Hussars in deployment was during the early 19th Century and The Napoleonic Wars. Most Nations fielded Hussars.

However, as technologies in Warfare developed and the advent of Rifled weaponry, Hussars (as most Cavalry), were deemed obsolete. Although the style would continue in mostly a ceremonial form, Hussars are still seen in this presentation - even today. 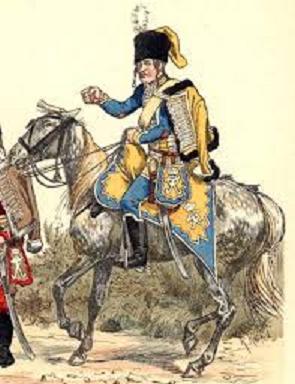