Established in 1670 (and still in existence), The British based Hudson Bay Company was established near Hudson Bay (Canada), as a means of capitalizing on the French ''monopoly'' on The Fur Trade in North America. Assigned a Royal Charter, The Company naturally ran afoul of The French (which resulted in many armed skirmishes). British Troops were assigned (as were Warships of The Royal Navy). With advent of The Seven Years War (The French and Indian War in America), Great Britain ousted much of their “Commercial rivals'', cementing their hold on The Trade in The Region.

Animal furs were of great importance to 18th Century Europe, as these commodities were used for clothing. The Company (unlike other Trading concerns), flourished in their Treaties with local Native American's, often using them for their production and trade in Furs. By the 19th Century, The Company switched to basic Textile and Merchandise Trades, and established a primary “lifeline” of goods between Canada (for England and European Markets). Very little trade was done with The United States (by US desire). They currently operate Merchandising Stores throughout Canada.

Their original Flag was based on The English Naval Ensign of the late 18th Century, which was a Red Field in it's entirety. The Upper Left Canton features the full Union “Jack' of England. Located in the extreme lower Right corner of The Flag (nearest The Fly), is The Company Brand Logo, which are the conjoined Letters ''HBC'' in White. The Brand Logo is still in use today after nearly 400 years. 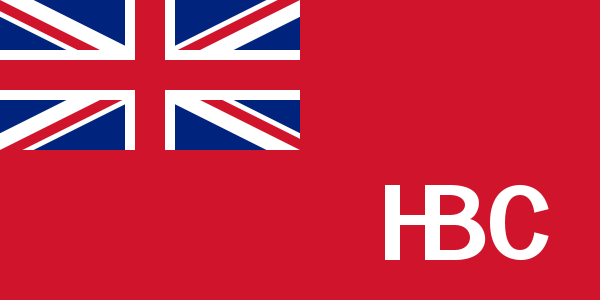