A popular Ship design seen in the late 17th and early 18th Century, The Hoy bore similar design traits of The Schooner. Much smaller, The Hoy were semi-shallow, draught vessels. Known for a central Main Mast only, they were designed for operating close to Coastlines. Capable of carrying large amounts of cargo, due to a large (wide) hull, Hoy's were very popular as commerce vessels- as well as Privateer/Pirate ships. Hoys were often armed, capable of no more than 10 cannons. Normally, 3 to 10 Pounder cannon were used. These were also located on the Main Deck (to maximize cargo space). In some cases, Hoy's were used to operate in larger Seas. They were very popular in the Caribbean. Most Countries operated them in their Colonies. Because of their somewhat cheap and easy construction (taking half the time to build than a full Schooner), Pirates coveted them as well. 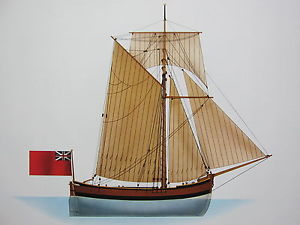