Developed by Benjamin Hotchkiss in 1873, The Hotchkiss was a light gun used by The Army and Navy in various roles. Seen as a replacement for the standard Army Mountain Howitzer, the lightness of the gun made it highly desirable. Made in 1 to 5 pound shell versions, The Hotchkiss was a true export weapon for American weapons manufacture. Most European Countries purchased Hotchkiss Guns for use. The weapons was a fixed chamber device, capable of 4 to 5 round bursts. Breech loaded and gas sealed by an iron rear plate, The Hotchkiss was highly effective. It lightness (around 125 pounds), made it popular with cavalry units. It had a maximum effective range of 1,800 yards. Ammunition canisters weighed 18 pounds. Innovative in that it featured a “Gunner's Plate” or protective iron shield for gunners to hide behind (and mounted on the front of the gun – the plate would be a common feature for most World War I field pieces. The Hotchkiss Gun and it's many design types would carry through well into the early 20th Century. 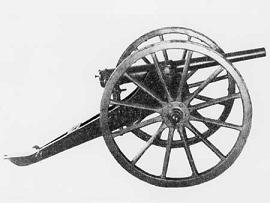