As has been previously discussed with The ''Battle Axe'', The ''Horseman's Axe'' was more of a variation that a classification. Battle Axes were primary cleaving weapons on The Medieval battlefield, and given the time and expensive required to forge a Battle Blade such as a Sword – The Axe was a far more cost effective type. Although not at ''elegant'' as The Sword, even Knights began to carry and use them (primarily mounted ones). Unlike the traditional Field Battle Axe, The Horseman's Axe was designed to be of better use to a Mounted Warrior. A longer Shaft was designed which allowed for a Warrior to have to not bend over to strike as much (thus risking being ''pulled down''). Also, Shafts were made of forged steel normally and not wood.

Axe Heads were also much smaller in relation to a standard Battle Axe. They ranged (both single and double recursive styles), roughly 4 yo 5-1nches in width. The addition of a Spike extension on the top Head Shaft (as well as a Spike at the rearward side of the Head) - was also very common.  Seldom were Horseman Axes used against a like heavily armored opponent for obvious reasons. The were more effective against lightly armored or Mailed Footmen. These weapons were very common in the mid-15th Century and would actually remain in use with many Middle Eastern Countries ''Cavalry'' until the 18th Century. 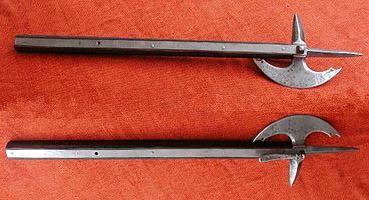