The simple and unassuming Horse Collar may at first, not be seen as important to History – but it’s development and inception served to revolutionize Farming practices throughout The World. It’s use can be traced to the 3rd Century BC in The Middle East with European inceptions as far back as the 7th Century AD.

The oval shaped collar was padded and designed to maximize a heavier load displacement on a Plow Horse, by positioning it better on it’s flanks. Hook or Lashing attachments connected The Collar to much heavier Iron Plows. These Plows (in the 10th Century AD), were made with wider and more angular shaped blades. With more leverage provided, a Horse (or Team) – could pull more and longer. This meant faster Farm Crop production.

Previous designs restricted The Horse’s airway and restricted his or her breathing. The later versions removed this obstacle. The Collar also made a Horse a much more valuable commodity to a Farmer or Commune (Shire). The Horse Collar also began to remove the need for strict Subsistence Farming and allowed a Farmer to be able to make an excess (which increased wealth and economy).

Horses became the more attractive element over Oxen, because they were often more plentiful. Still, some kept Oxen and adapted Collars for them as well. The Horse Collar also served to help end The Feudal System, causing those who could own their own animal – to be able to produce a “cash” Crop. In most cases, a properly made and worn Collar allowed an animal to pull up to 1,100-pounds of weight without injuring themselves. Despite Modern technology, The Horse Collar is still in use today throughout The World as an important component to Farm Production. 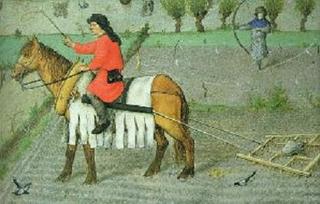