During The Roman Kingdom Period (550 B.C.), Rome was a monarchy. It had no real standing army. When one was needed, a compulsory "levy" or draft was initiated for all able bodied citizens (male and of age) - class not withstanding. Divided into different "levels" based on class or social standing, First and Second class citizens formed the more more elite Equite (or cavalry) and the Light/Heavy infantry. It was they who could afford the needed weapons,armor and related camp equipment. At this time, Rome did not supply this. It was considered a scared duty for all Romans to serve in their military (a view that would change over the centuries. When an army was raised, it was usually after harvest time (when all would be available). Rome borrowed much of it's army appearance from the Greek. It's "Hoplite" infantry would carry a 6 to 8 foot spear. A small shield would be the order of the day. The Hoplite would wear a bronze Breastplate (no doubt with Greaves). It had been debated if Roman Hoplites wore footwear (or none at all). Most information regarding the early Roman Hoplite has been lost. When Rome developed into The Republic Period, almost all of it's military was changed without much fanfare. 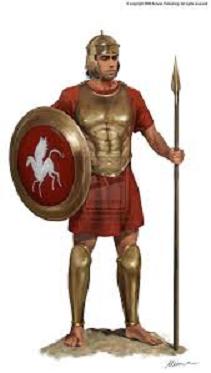