An innovative “Novelty” Weapon designed by The Holman Manufacturing Company (Tools) of Cornwall, England – The Holman Projector was envisioned as deployed “Mortar”, which was operated by  compressed steam, fed pneumatically (air). Originally, The Projector was marketed to The British Royal Navy, to be used on board non-Warship Class Vessels. The Holman Projector could launch an 18-pound Shell 100-yards. Mounted on a traversing Base, fed lines extended well behind the weapon. The 5-foot Brass barrel was “sighted” by an attached Tangent mounted on the Front of the barrel. Extending from the Tangent was a long copper arm with a circular “targeting” mark. The Project was somewhat effective at low flying Aircraft. Although not very effective at range, 3 versions were actually commissioned by The British War Ministry. Seen as effective if used “en masse”, a selling factor for The Company was it’s cheapness to make and sell. Several thousands were deployed from 1940-1941. However, The Holman Company soon switched to the manufacture of traditional Mortars in 1942, with it’s Projector ceasing production thereafter. 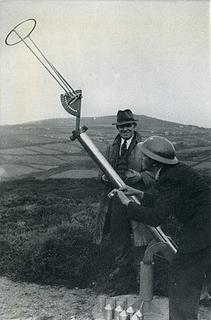