As we have seen, especially with regards to the average American Civil War Southern Soldier, feeding himself could quite a daunting task. By 1862, The Union Naval Blockade had taken it's toll on supplies brought in from Foreign Nations. Constant pressure along The Mississippi River (in The West), as well as The Shenandoah Valley in The East, made a steady food supply difficult. Southern Soldiers were nothing if not inventive when it came to food (as we have seen with such items as "Sloosh"). Enter  The Hoe Cake. Not a Pastry, The Hoe Cake was a mixture of Cornmeal, Water and Salt. The resulting batter was fried (in animal fat), so that a solid (yet flaky) pancake of sorts, was created. Eaten hot, often many were made and allowed to cool. In this way, they could be stored and carried for "eating on the run" (or March). In cases where Cornmeal even became scarce, the same "recipe" could be employed with Flour. Hoe Cakes would evolve into a staple of Southern Breakfast "fare" after The War. They still are made (at home or in establishments), often flavored with sugar or cinnamon. 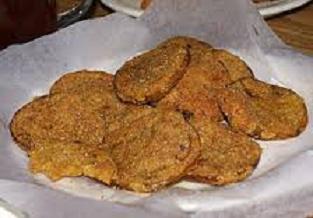