A “Queen Elizabeth I'' Class Battleship of The British Royal Navy, she was the 7th to bear the name of “Warsprite” (the first being built in 1596). She served in both World War I & II. Launched in 1915, The “Warsprite” earned more “Battle Honors” than any other Royal Navy Ship up to that date. Nicknamed The “Grand Old Lady” in 1943, she would serve as Flagship of The Mediterranean Fleet during World War II. “Warsprite” displaced 33,000-tons. She was 650-feet long and stood 35-feet high (Beam). She was powered by (24) Boilers and (2) Steam Turbines. “Warsprite” could make 14-mph on The Seas. He Armor Plating was rated at 5-Inches throughout. She was armed with (8) 6-Inch Guns, (4) 103mm AA Guns, (4) 40mm Guns and (4) 12.7mm AA Guns. Her later features included the ability to carry and launch (2) Sea Planes that were Catapult launched from he Deck.

During World War I, “Warsprite” fought at The Battle of Jutland (1916), taking heavy damage in the engagement. In World War II she fought in most of The Mediterranean Naval Theater of Operations. She supported The Allied Invasion of Sicily and Crete. Later deployed in support of The Normandy Invasion of France, it was HMS ''Warsprite” who first fired on German Beach Positions prior to the initial Troop Landings. By the end of The War in 1945, she was showing her age and many “Battle Scars” sustained in 2 World Wars. In 1947, moored in The River Clyde (Portsmouth) awaiting decommissioning, she was severely damaged by a storm. Sinking to her Towers, attempts were made to raise her – without success. “Warsprite” eventually drifted to shore (1950). The massive wreck was finally taken apart, taking 5 years of work to safely accomplish. 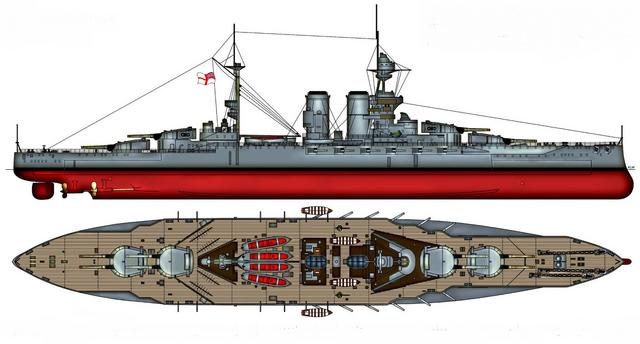