Built in 1816 and launched the following year, HMS “Trincomalee” is a Frigate-Class warship. Constructed in Bombay, India 0 she was built of teak wood entirely (due to a shortage of Oak). She displaces over 1,000 tons and is 150 feet long. She is 40 feet in height (beam). A full rigged vessel she was armed with 38 and then 46 guns of varying classes – (her largest, 35-pound Carronades). She crewed over 320 Officers and men. She was named after The Battle of Trincomalee (1782). Being at the end of The Napoleonic Wars, “Trincomalee” was sent back to England and put into reserve. She spent the later part of the 1840s on duty in The Caribbean – enforcing anti-slavery laws and helping to to a rebellion in Haiti (then a British Colony). In the 1850s, “Trincomalee” was assigned to The British Pacific Squadron. She spent the 1870s through the 1890s as a Training Ship. Renamed in 1897 as HMS “Foudroyant” - a Supply Ship. She still remained on “Active Service” until 1986, when her name was switched back to “Trincomalee” and restored to her early 19th Century condition. She is one of the two only surviving British Frigates still in existence. Both of which are Museum Ships. 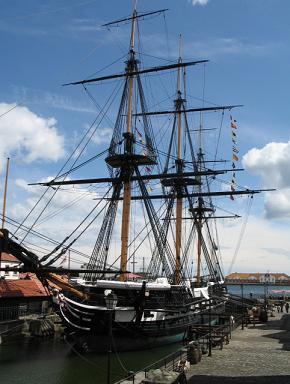