Classed as a Post Ship (smaller than a Frigate, but still carried a minimum of 20 guns), HMS “Rose” was commissioned in 1756 and launched in 1757. She displaced 450 tons and was around 108 feet long. She was 31 feet high (beam) and was wind powered. Crewed by about 160 Officers and men, HMS “Rose” was tasked at the beginning of The American Revolution with suppressing smuggling and privateering off of the Colony of Rhode Island. So effective was “Rose”, that she was the driving force in the formation of The Continental Navy (the forerunner of The US Navy) as a way to combat the Royal Navy. HMS “Rose” saw serve in The Caribbean (hunting Pirates) and was once considered as the Flagship for Captain James Cook - for his circumnavigation of The World. She was scuttled in 1779 in Savannah Harbor (GA/US), as a means to block the harbor from Colonial use. Her hulk was destroyed after the War. Very few artifacts of her have been found. 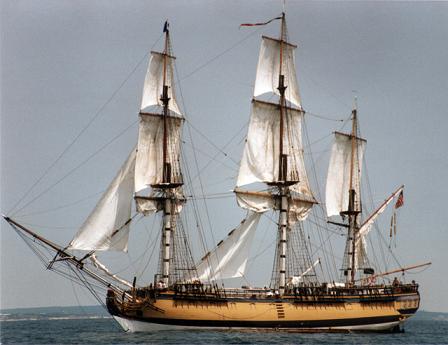