The British Battleship “Nelson” was the namesake of only (2) “Nelson” Class Warships built between World War I and II (1925). The Class were unique to The British Navy in that they had their Main Gun emplacements forward of the Superstructure (Stern). Additionally, they were the only British Battleships to use the massive 16-Inch Main Guns (somewhat common to Battleships during The Era). During World War II, “Nelson” served in The North Atlantic Squadron and was part of Operations against The German Battleship ''Bismarck”. She served as Flagship for American Allied Commander-In-Chief Dwight Eisenhower when an Armistice was signed between The Free Italian Government after Mussolini was overthrown in 1943.

“Nelson” also supported The Allied Landings in Normandy, France in 1944 and was later deployed to protect The Indian Ocean. After The War, “Nelson” was reassigned as a Naval Training Ship. Decommissioned in 1948, “Nelson” served as a Targeting Ship and was scrapped in 1949. She was 34,000-Tons (displaced) and was over 700-feet long (with a 106-foot Beam). She was powered by Twin Geared Turbines and (8) Boilers. “Nelson” was capable of 27-mph on the open Sea. Her Armor Plating ranged from 9 to 15-Inches throughout. She Crewed over 1,300 Men. 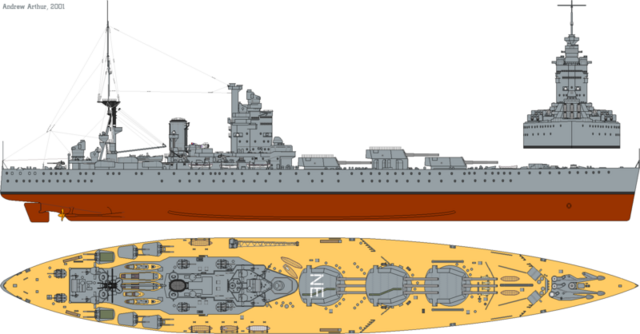