The HMS ''London'' was a 2nd Rate Ship of The Line, built by The British Royal Navy. Launched in 1840, She was part of The Fleet which conducted intense bombardment of The Russian controlled City of Sevastopol, during The Crimean War of 1853-1856. She was severely damaged in the engagement. A Full Sail Patterned, 3-Masted Warship, she was sent back to England thereafter and saw no further action in The War. Converted to Steam and later Screw propulsion, ''London'' would be deployed as part of The English Slave Suppression Fleet, operating off The Coast of Africa from 1878 until 1882. she would be engaged in battle with Zanzibar ''Pirates'' and suffer damage to an extent that she was again sent Home. Too expensive to repair, ''London'' was broken up and sold as scrap in 1883. HMS ''London'' was over 2,500-Tons displaced, and was 205-feet in length. Her Beam was 55-feet. She supported (originally) 60-Guns and later (90) – most of which ranged from between 32 and 68-Pounder Cannon. ''London'' crewed over (300) Officers and Men. 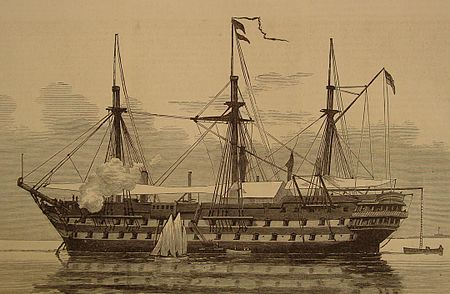