HMS “Endeavour” was a Bark of The English Royal Navy. She served as a “Research” Ship under command of Captain James Cook (and carried him to the discoveries of Australia and New Zealand). Launched in 1764, “Endeavour” was 97 feet long with a beam of 30 feet. She displaced over 300 tons. “Endeavour” carried over 3,300 square yards of canvas sail. She crewed 94 Officers and Men. She was armed with Swivel Guns (10) 4-Pounders and (10) 10-Pounder Standard Deck pieces. She helped with the settlement of English Colonists in the region (transporting supplies and livestock in assistance). Refitted in 1768, “Endeavour” also served as one of the few representatives of British Naval power in The Pacific. In 1775, she was used to transport Hessian Mercenaries from England to The Colonies during The American Revolution. In 1778, fearing an impending French Flotilla, “Endeavour” was scuttled of of Rhode Island (Harbor) – in an attempt to slow The French. In 1991, an Expedition was conducted to attempt to locate “Endeavour”. Possibly found, she is unable to be raised (what is left of her). Her name would be used by The Royal Navy on many other ships and well as being used for one of NASAs (US) Space Shuttles (1990s). 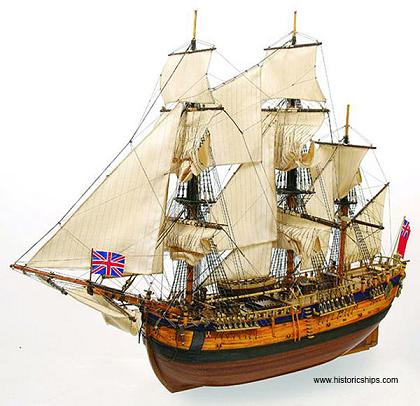