The British Warship christened HMS ''Duke of Wellington'' was one of England's first Steam-Sail ''Conversion'' Vessels. Launched in 1852, ''The Duke'' was a 1st Rate Ship of The Line. A Three-Decked Ship, She was considered the pinnacle of Military Technology for the mid-19th Century AD. The Flagship of The Royal Navy, ''The Duke'' never saw active Combat (as She was still being fitted during The Crimean War). She participated in a massive 131-Gun salute to Queen Victoria in 1886. Perhaps one of the most photographed Ships of Her Era, ''The Duke'' was a Port Ship until She was decommissioned in 1904. Broken up and scattered on The Thames River, some of Her timbers were found in the 1960s. ''The Duke'' was 240-feet and displaced at 5,800-odd Tons. Her Beam was 150-feet. Although Full Rigged, Her Steam Boilers could produce 780-HP and achieve 10-mph. Supporting a Crew of 400, She was armed (originally) with 131 Cannon of various Poundage. 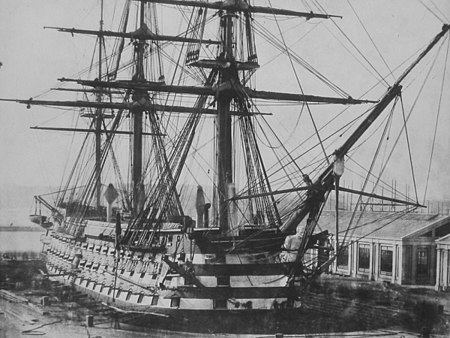