HMS “Defense” was a British “74”-class Warship. Launched in 1763, she was over 1,013 tons displaced. At 168 feet long and a beam (height) of 50 feet, HMS “Defense”, crewed 500 Officers and men. During The American Revolutionary War, she was assigned to The Channel Fleet (against any French incursions). “Defense” did not see active service against The Colonies. Dry docked until 1785, she was re-commissioned in time for The French Revolutionary Wars. In 1786, “Defense” participated in The Battle of The Nile. Known to have sunk 6 French ships, ”Defense” also was responsible for the burning of 15 Merchants ships. Ran aground in 1811 due to a hurricane of Denmark, casualties (including the Captain) were listed at all save 14. Although her guns were salvaged, her wreck was allowed to break up on the beach. 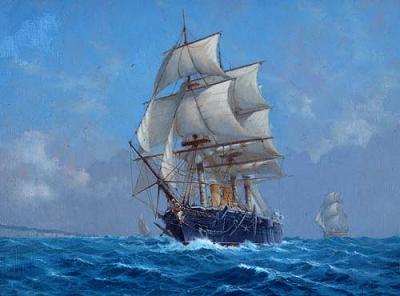