The British Warship HMS ''Cornwallis'' was a ''Third Rate'' Ship of The Line, commissioned and launched in 1813. Built in India, She was a ''Vengeur''-Class Vessel, She was deployed in support of The British War effort against The United States in The War of 1812. The USS ''Constitution'' was operating near Portuguese waters and HMS ''Cornwallis'' was needed to counter. The two would never met. She did however battle against The USS ''Hornet'', almost destroying Her (but The US Warship was able to escape, heavily damaged).

It was aboard Her Decks, that a Peace Treaty was signed between Britain and China, which ended The First Opium War (1842). ''Cornwallis'' would continue to serve into The Crimean War of the 1850s. She would be placed into Reserve (despite He age), - in 1865. Renamed in 1916 as HMS ''Wildfire'', She served as a Training Vessel. In 1957, at 144 years old – considered too expensive to conserve, She was broken up.

Her original armament was (74) Cannon, in the 12 to 32-Poundage. Most of these remained well into the 1850s, with some minor additions. 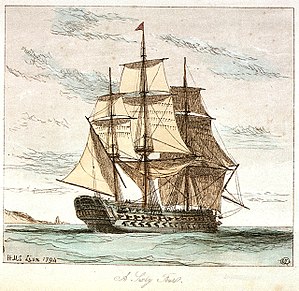