HMS ''Britannia'' was a First-Class, ship of The Line with The British Royal Navy, between 1820 and 1869. She was never converted into a Steam Warship, and was originally constructed for Service in The War of 1812 (between England and The United States). ''Britannia'' was a 3 Master, with Full sail pattern deployment. Damaged during The Crimean War (1855), She would return to England, and upon repair, served as a Hospital Ship. By 1863, ''Britannia'' would be docked at Dartsmouth and serve as a ''floating'' Residence for Royal Naval Cadets. She would eventually become the primary Training Vessel with The British Navy, until She was broken up in 1869. ''Britannia'' displaced 2,600-Tons and was 200-ft. Long. Her Beam was 55-ft. Crewing 220 Officer and Men, ''Britannia'' supported 120 Guns of various Poundage. 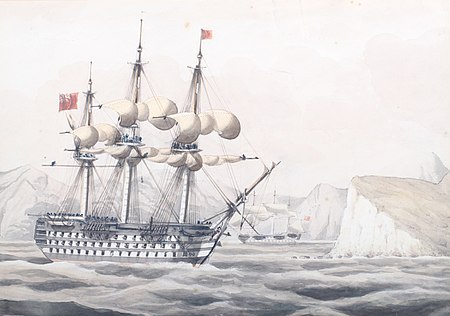