Originally this Collier-Class Ship was named The “Bethia” and was built in 1784. She was purchased by The British Royal Navy and refitted in 1787. Renamed HMS “Bounty” - she was 220 tons displaced and around 90 feet long. She sat almost 25 feet tall (beam). Outfitted with 10-4 pound Deck Swivel Guns and 4-4 pounder cannon, “Bounty” was initially tasked to procure breadfruit in The Pacific and transport the commodity to local Colonies in the Region for Slave consumption and growth possibilities. She staffed 44 crewmen. “Bounty” became one of the most famous in history for it's tale of Mutiny. Life on a British Naval ship was difficult. Captains were often harsh task masters who help absolute power over their crews. Often cruel punishments were metted out for the slightest infractions.

Such was the supposed personality of Captain William Bligh. Having served with distinction with British Explorer James Cook, Bligh was promoted and given command of The Breadfruit Expedition. His Acting Lieutenant – Fletcher Christian, noted Bligh's so-called cruelty (often trying to intercede for the sailors). It took 10 months to reach the Tahitian Islands. Transplanting and proper storage of the cargo took many weeks. Many of the crewmen formed “attachments” with the Native Women (Christian even married one). “Bounty” eventually left Tahiti. After a week at sea, Christian and 22 men mutinied and took the ship. Setting Bligh and some 18 others loyal to the Captain adrift in Longboats – it took 47 days to reach a Dutch Port (the closest). The “journey” was a story in itself. Bligh lost none of his crew. Bligh immediately made his report to The British Admiralty. The Mutineers went back to Tahiti and picked up their women. Knowing full well that Tahiti was the first place The Royal navy would look, the criminals set out for other islands to hide. Several attempts found nothing but hostile tribes. The HMS “Pandora” was sent to locate and bring back the Mutineers.

They were able to track down some 14 of the criminals (most of the crew split up and began to hide on various friendly islands by this time). Christian and his remaining crew and women eventually made their way to Pitcairn Island (in the distant vicinity of present Australia). The Mutineers burnt “The Bounty”. 35 years would pass before The HMS “Blossom” arrived on a routine exploration voyage in the Region. Spending 19 weeks on Pitcairn, The Captain met with the last survivor of the original crew. Christian's “fate” is of course – legend. Some say that he was killed by some of the male Tahitians that he had brought with him to the island (in a form of “civil war”). Other say that he grew ill and died. No “one” story is accepted as true.

The small group of Mutineers had managed to make a small settlement (which still exists today). As for The “Bounty” - even her “legend” is never ending. A 1962 movie “Mutiny on The Bounty” was made, to include building a full scale sailing replica of “Bounty”. From 1962 to 2012, this “Bounty” continued to proudly sail the seas. Sadly, she was caught in a storm of the Eastern United States. Although she carried “modern” sailing equipment, the majestic “Bounty” floundered and sunk. Ironically, only 1 of the crew (dead) was recovered. The Great (x5) Granddaughter of Flecther Christian! 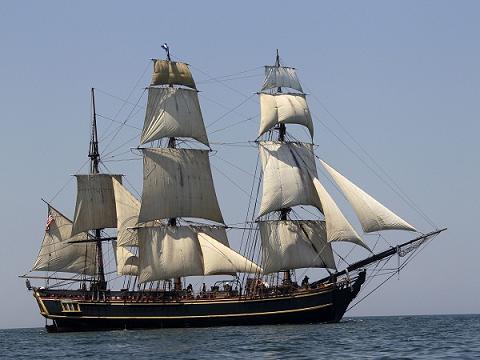