With similarities to the tragedy of the sinking of The RMS “Titanic” in 1912, The HMS “Burkenhead” was originally built as The Steam Frigate “Vulcan” in 1845. She was reassigned as a Troop Transport and renamed “Burkenhead”. Also capable of being Sail Rigged as a Brig, “Burkenhead” was an Iron Hulled Vessel that was 1,918-tons displaced. She was 210-feet long and stood 40-feet tall. Her Steam Engines (Twin) were capable of over 500-HP. Her Twin Paddle Wheels were 20-feet in diameter. Crewed by 125, “Burkenhead” carried  (2) 96-Pound and (4) 68-Pounder Cannon.

Her sinking involved faulty navigation off The Coast of South Africa. The “Burkenhead” was sailing near known areas of submerged Rocks  (which were supposedly well marked on Maps). It is unclear why she smashed into them. “Burkenhead” was built with 12-watertight compartments, but her Pumps failed. Off the Ober 600 on board, several Regiments of British Soldiers were present. Inadequate Lifeboats and Vests were another day service first loss of life. Soldiers ensured that all Women and Children were evacuated. The well known Naval Tradition of “Women and Children First” (later called The “Burkenhead Drill”) – came from the tragedy.

Only 120 British Soldiers survived. The rest remained on board until the last seconds. Upon sinking, many Soldiers tried to swim the 2-miles to The African Coast. All drowned or were consumed by Sharks. Accurate Regiment numbers and names will never be truly known, as Muster Books went down with The “Burkenhead”. 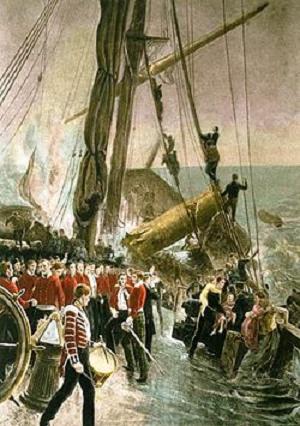