HMS ''Bellerophon'' was a British Naval Ship of The Line, built in 1782. She was a ''74'' (amount of cannon she deployed) and fought in three major naval actions with The Royal Navy. She was present at Trafalgar (1805) and was placed off Ireland to intercept the possibility of French invasion (with Irish assistance). This event never happened, and ''Bellerophon'' would eventually be deployed into The Caribbean to protect English assets from The French. When Napoleon lost the decisive engagement at Waterloo (1815), He surrendered to The British aboard ''Bellerophon''. Soon after, ''Bellerophon'' was converted to a Prison Ship and renamed ''Captivity''. She would remain as such until 1834 when She was decommissioned and turned over for scrap in 1836. ''Bellerophon'' displaced 1,600-tons and was 169-feet long. Her Beam (height) was 50-feet. As statd, She was a ''74''-Gun Warship (3-Decks), which supported 550 Officers and Sailors. Her Crew lovingly nicknamed Her ''Billy Ruffian'' (an allusion to ''tough street fighter''). A Full Rigger (Sail pattern), Her Guns ranged from 9-pound to 32-pound. 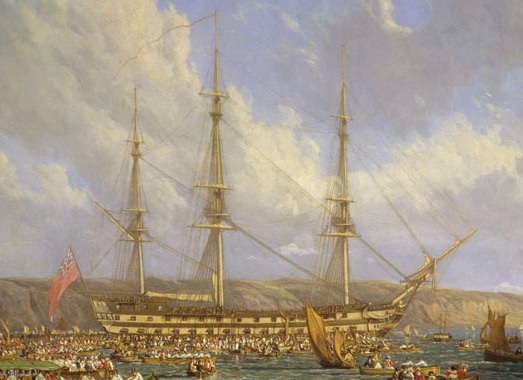