Originally commissioned for construction by the Brazilian Navy as The "Rio de Janerio" by English Builders in 1911, she was once considered one of the best armed Dreadnoughts built. However, due to economic failures, the Contract was not finished. She was sold to The Ottoman Imperial Navy and renamed The "Sultan Osman I".  When The Ottoman Empire joined Imperial Germany as an Ally in World War I, "Osman I" was confiscated by The British Royal Navy and again renamed HMS "Agincourt". She displaced over 30,000-tons and was 670-feet long. "Agincourt" stood 90-feet tall.

Her armament included (7) 12-inch Main Guns, (20) 6-inch Cannon, (10) 75mm Guns and (3) 21-inch Torpedoes. Her crew compliment was 1,200.  HMS "Agincourt" had armor plating that ranged from 1 to 12-inches, spanning from here hull to upper super structures. She was assigned to The North Sea "Grand Fleet", and fought at The Battle of Jutland (1916). After this engagement, "Agincourt" was assigned to Coastal Defense duty. She was scrapped in 1922. 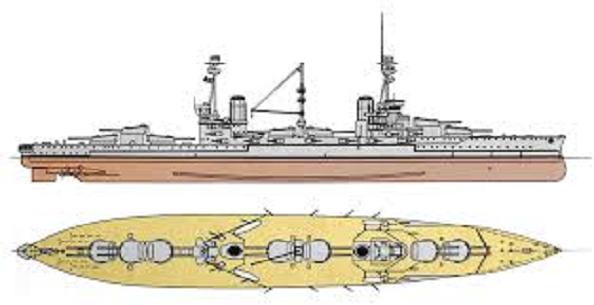