The Hlinka Guard were the Military arm of The Slovak People's Party (Slovakia). Formed in 1938, The Party espoused The Nazi Germany political ideas. Supported by Hitler, The Slovak Party created it's Guard after The Sudetenland Crisis in 1938.
Trained by The Waffen SS, The Hlinka Guard were used in many of Nazi Germany's Concentration, Labor and Extermination Camps. Their Flag was a Blue Field with  large White circular disc, centered. Placed inside, was a Red equal double-barred Cross (similar to The Lorraine Cross). The Guard disbanded with the Fall of National Socialism, although a radical Neo-Nazi organization has revitalized The Guard Flag for their use recently (2010). 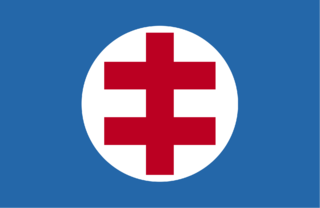