More prevalent in the 2nd Century AD Roman Military, the ''Hippika Gymnasia'' was a form of training and exercise used to develop Roman Cavalrymen and tactics. Roman Cavalry, as has been discussed was used very much differently than later traditional mounted soldiers. Roman Cavalry were used to convey a solider from one point to another on a battlefield. Upon arrival, the Cavalryman would dismount and fight. By the 2nd Century AD – tactics began to develop that would define the more traditional Cavalry role.

The Hippika Gynmnasia was a form of training school for Cavalry. Cavalry was taught how to fight from the saddle as well as in the use of the specialized Spathion – or Long Sword. Spear fighting from the saddle was taught as well as flanking tactics. Most importantly, equestrian (horsemanship) was stressed.

Soldiers often competed against themselves for self-styled honorific titles. Although originally a private affair, onlookers would occasionally flock to Gymnasia fields to watch The Cavalry train and exhibit their horsemanship. By the 3rd Century AD, Hippika ''performances'' became quite popular among all Classes of Roman Citizens who had access to a local Gymnasia training field. 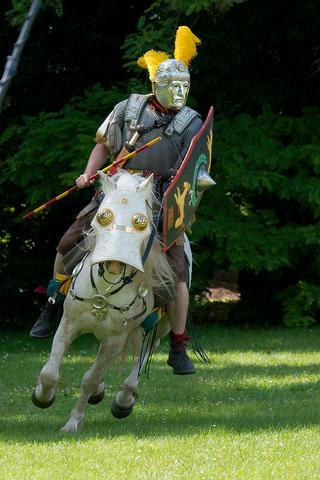