A popular fighting knife from 17th Century India and Syria, The Haladie was an unusual double-bladed weapon. The “handle” of The Haladie was in the center of the blade (separating the two components). Both blades extended to various lengths (most of which were around 8.5 inches in length each). The Haladie had a total length of close to 25-inches (with some reaching 34 inches!). Used as a personal defense weapon by the Warrior-Class of The Raiput Clans, some Center handles also featured stud extensions much as seen with Brass Knuckle devices. A stylized defensive/offensive movement was used to deploy The Haladie Knife. 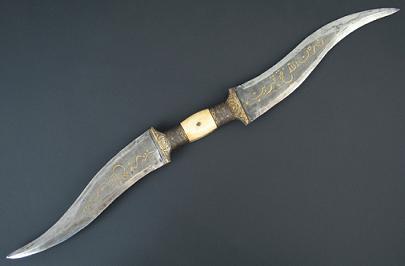