Developed in India in the 16th Century. These gauntlets were designed for close quarters duels. Made of iron segments, they were wired or riveted in place. Worn as gloves, the fingers were sharpened to enhance soft tissue damage. In addition, raised metal balls on the gloves backs – featured raised spikes. A single glove was around 10.5 inches long and weighed around 2 pounds. Both combatants would wear these gloves (also using a stylized for of Hindu Martial Arts for deployment). 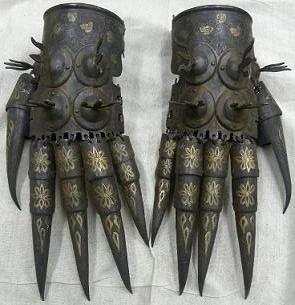