A Battle Formation and Tactic of Scottish design (although it was first used by The Irish in the 1730s), The ''Highland Charge'' was an adaptive Charge used by Scottish Highland Clans. The Formation was used heavily during The Jacobite Rebellion of the 1740s and would continue into the 1780s with a renewed interest in Scottish Independence by The Clans. As we have seen with a basic Infantry Charge, the great difference with that and The Highland ''version'', was that it was deployed from steep Hills, running downward towards an Enemy (The British). The downward momentum would add to their overall speed.

Packed into tight Formations or ''mini-squares'', The Highland Clans would make great use of their Battle Axes and Claymore Swords. However, the primary drawback of The Highland Charge was the accepted risk of the first Rank being killed or wounded outright by Enemy Musket and Artillery fire. It was seen as a ''great honor'' among Clansmen to ''brave one's Manhood, well tested with The Highlander Charge''.

Despite firearms, the psychological advantages of The Highland Charge was apparent. Normally using physically muscular and tall Men, younger inexperienced British Soldiers would nonetheless ''break Ranks and run'' (despite the curses of their Officers and NCOs). The Highland Charge also served to increase a battle tactic which was still relatively ''new'' to battlefield practices – The Bayonet. As a result of The Highland Charge, British Forces throughout The Empire increased their usage and training with The Bayonet. This would prove the ultimate undoing of The Charge (in most of it's incarnations). 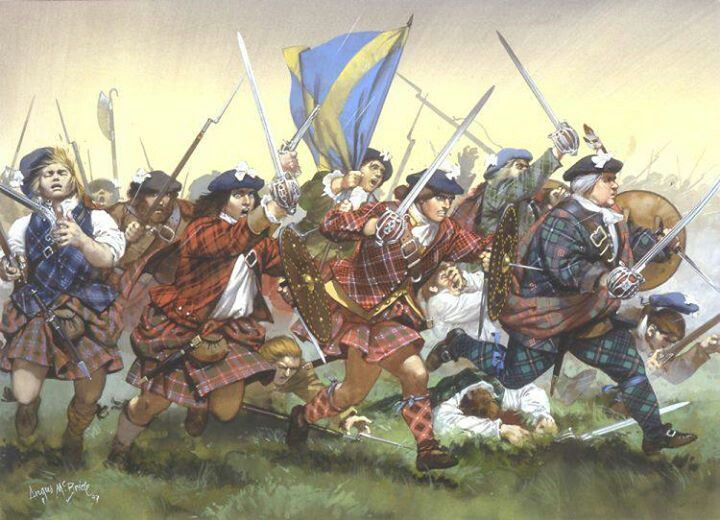