During The Middle Ages, various collectives of people throughout Europe began to question the authority of The Church. It also came into play that many had different opinions regarding Jesus Christ, The Bible and it's teaching. To disagree with The Church meant excommunication or even physical death (execution). Still as the corruption of The Church worsened, so to did the rise of Reformers. These Reforms were bent on changing The Church from “the outside”. The Church branded these groups “Heretics”. Often Regional Monarchs were pledged to obey The Church in the persecution of such. Most Royalty agreed with The Church. Such “independent thought” was dangerous and could lead to revolts against their authority as well. There were many such Heretical Groups operation during The Middle Ages. Their list is long. Provided is a “short list” of the most “vilified”:

THE ALBIGENSES
An offshoot of The Cathar Movement, they formed in Southern France around 1144 A.D. By 1167, their numbers had grown so, that they even formed a “Council”. They renounced “worldly” possessions, sexual intercourse, the eating of meat, and refused to attend Church regularly. Albigenses were responsible for the assassination of a Papal Legate in 1208. A Papal “Crusade” was leveled at them. In 1244, at their final stronghold of Montsegur, they were all but slaughters. The “few” survivors went “underground”. The Albigenses are not heard from past the 15th Century.

THE ARIANS
Arianism's principle belief was that Christ was “separate” from God (and even created differently). They developed in the 3rd Century. Their “message” actually began to grow (which upset the early Church). Viciously suppressed by Constantine and The Council of Nicea, most of The Arians vanished by the 5th Century.

THE BOGOMILS
Seen around the 14th Century, The Bogomils followed many principle of the more ancient Gnostics. Their primary belief was that there were “2 Gods” (one Good and one Evil). They developed a slight following in Eastern Europe. Papal Crusades wiped them out (except for a few survivors).

THE BRETHREN OF THE FREE SPIRIT
Briefly popular in the 13th Century, The Brethren of Free Spirit, developed in several Germanic Countries. They stated that human will “was supreme”. So did The Papal Crusade against them. Their Cult was not heard from past the 14th Century.

CATHARS
The main “Wheel” of Heretical religions (and creating many similar Branches), The Cathars started in the early 11th Century. They renounced all pleasures and vices and argued against The Church and it's ”excess”. Seen in France and Italy, The Cathers were all but exterminated by a “wrathful” Church.

HUSSITES
Reformists from the 13th Century, they formed in Upper Germanic Nations (spreading into many Lowland Countries). The Hussites believed in the “theory” of Transubstantiation, (but recognized the Altar items used as “plain” bread and wine. Not as large as some Groups, they were persecuted and are not seen much past the 15th Century.

MANICHEANS
The theory of Manicheanism was seen in the 4th Century A.D. In practice, they stated that Salvation could only be achieved by total rejection of the body. Matter was seen an “darkness and evil”. Seen in Upper Italy (and supposedly Spain). They were persecuted by the early Church and are not heard from by the 5th Century. Some of their “theories” were later adopted by other Heretical Groups.

NESTORIANS
Nestorianism was a major problem to the early Church. Many were starting to become followers of their belief system. They though Christ had 2 distinct personalities and that Mary could NOT have been his Mother (as no human could contain such “power”). Mary was seen as giving birth to the “human” Jesus and NOT the “spiritual”. They were finally suppressed (to some degree) by the 6th Century.

WALDENSIAS
The Waldensians were originally “crafted” by The Church to combat Catharism. They began to turn on The Church and concentrated on graft, vices and excess. They developed a large following in Germany. They were effectively suppressed by the 14th Century. 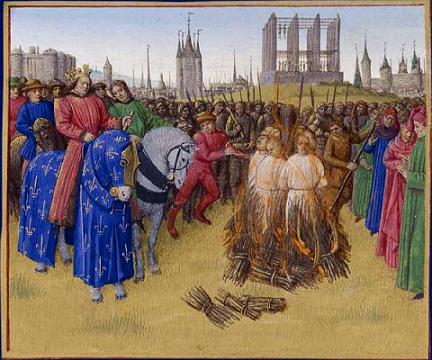