Henry Newton Brown was another American Western figure, who ''walked the line'' – as both Lawman and Outlaw. Born in Missouri (US) in the 1850s – His Parents died and left Him an Orphan making His way to an Uncle in Texas, Brown started working as a Cowboy and Drover in the 1870s. A ''good Rider and quick with a Gun'', Brown would be hired by John Tunstall as one of His ''Regulators'' at the beginning of The Lincoln County Cattle War of 1878. Brown was a friend of ''Billy The Kid''. He and other Regulators were charged in the murder of Sheriff William Brady – the prime event that started The War. Brown and other did their best to ''enforce'' Cattleman's Rights, but in the end would fail. Brown (and others), were trapped inside a ''hideout'' Home in 1879 when a large Party surrounded the home and set it on fire. Killing all who ran out, Brown (and a few others) – were able to escape. Brown and ''The Kid'' would become Cattle Rustlers as a means of employment for several years – before leaving ''The Gang''. Ending up in Caldwell, Kansas – the former Outlaw was hired as Town Marshal. Brown would be a very effective Sheriff, but (it seems) – He ''missed'' His former lawlessness.

In 1884, Brown and several ''friends'', concocted the idea of robbing a Bank in Medicine Lodge, Kansas. Getting permission to leave His Law Enforcement job, Brown planned the daring daytime heist. But His plan failed – resulting in His (an others) arrest. The capture was not without fatality. The Town Sheriff was killed. Well liked, a Lynch Mob was formed to both seize Brown and hang Him without Trial. Brown was able to trick The Deputy Sheriff into releasing Him from His cell (in The Jail), but it was too late. The Lynch Mob would break into The Jail and – in a hail of bullets and shot, literally ''cut in two'', Henry Newton Brown. His ''remains'' were sent Home to His wife. He was only 27 years old. 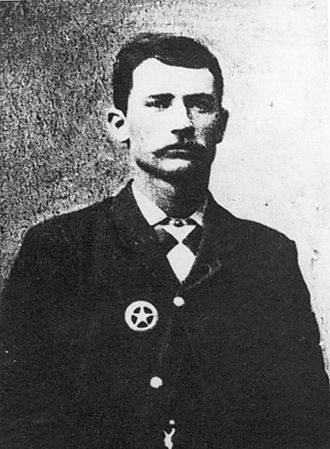