One of the more important symbols of a Coat of Arms was the Helmet (or Helm). It symbolized Knighthood. In most cases it's color was silver or gold. Helms were also used to denote Peerage when displayed. The were place on the Field of a Shield called “The Honor” (top). The positioning of the Helm Visor was very important as well. Upper Nobility Helm's were displayed with the Visor “opened” or “barred”. Lesser Nobility or City Officials were portrayed with “Closed” Helms. This practice was standardized around the 15th Century. In many cases, the award of The Helm, was the only Achievement MOST Nobles earned (many having served in The Crusades). Additionally, favored Tournament Champions vied for these Achievements (in lieu of actual combat). No set “type” of actual Helmet was used. Although the “Tilting Style” was most sought, variations are found. 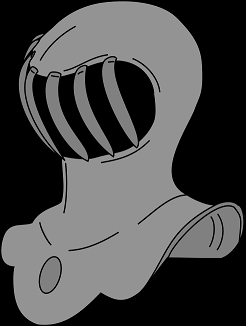