Originating in Medieval Germany, The Helmschau (or “Helms Show”) was a function that preceded a Tournament. They were popular in 15th Century Germany. It was a “parade” of Participant's Crests to establish (before Judges) – who was of “Tournament Rank” and thus allowed to participate in the Event. Heralds were also used to help “make decisions”. In addition, “Patents of Nobility” were provided to establish Noble Title (to the Generational Requirements already established). This was done to establish that the Participant could in fact provide the large amounts of needed Armor and weapons for the Tournament (most importantly, more than 1 horse!)

Although many “Lesser Knights” or “Country Knights” could participate in “Ground Events” (Sword, Axe, Grappling, etc.) , only the “Privileged Few” could actually participate in “The Joust”. These few would wear their Crest outwardly (on helmets and on their Breastplates. In France (15th Century), another component of The “Helm Show” was to parade various local Noble Ladies past the aspiring Jousters. IF any Lady had heard (or had knowledge) of a Participant who had “cursed” or spoken of ladies in an “ungentlemanly manner”, she would touch the Crest of the Offender (thus disqualifying him from participation). 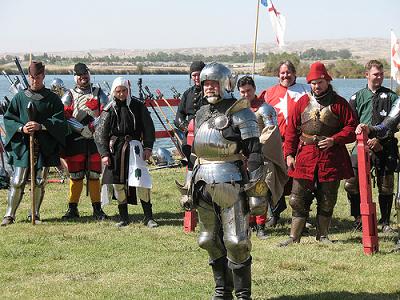