Also known as The Heavy Plough, this was a Farming Device that would revolutionize the way agriculture and harvesting would develop from the early mid-Middle Ages forward. Said to have been pioneered in The Han Dynasty of China in the 2nd Century BC, it was first seen in limited use in Northern Central Europe by the 5th Century AD. Heavy than a traditional Plough, which was used to scrap and dig into the upper layers of solid, for the purposes of planting seed, The Heavy Plough was able to dig a deeper furrow. This was seen as providing a much better seed planting method, as birds and rodents could not deep as deep into the ground to take and eat the seeds. As such, stronger and heartier plants could be produced.

The Heavy Plough also was designed to allow more Oxen to pull. This also aided in creating deeper furrows and also sped up work time. This meant more furrows could be dug and thus, more production at harvesting. New planting grounds could be selected, regardless of condition. The Heavy Plough also meant less time pre-clearing a new field – which lessened manpower use. As such, The Heavy Plough would also serve to eventually help end Medieval Feudalism, and create independent Farmers. This would also spur the creation of “Open” Markets and Non-sustenance Crops (sale goods). 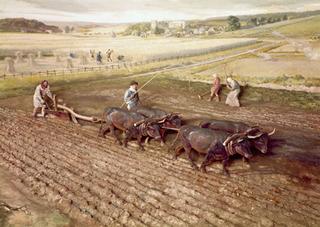